The Euro-Mediterranean Research Network on Migration is launched at UPF

The Euro-Mediterranean Research Network on Migration is launched at UPF

The Ciutadella campus of the University is home to the 15th IMISCOE Annual Conference, the European Congress of reference on migration, which will take place from 2 to 4 July, organized by the GRITIM-UPF research group, with the presence of more than 600 researchers. 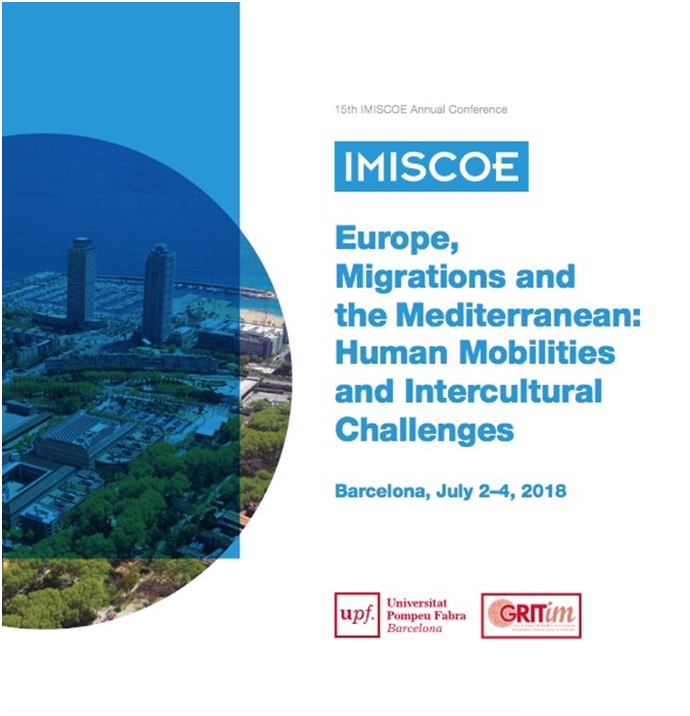 Pompeu Fabra University, through the GRITIM-UPF research group, is organizing the 15th IMISCOE Annual Conference (International Migration, Integration and Social Cohesion), the largest European network of researchers in the field of migration and integration, under the title “Europe, migrations and the Mediterranean: human mobility and intercultural challenges”.

During the Conference, to be held from 2 to 4 July 2018 on the Ciutadella campus, a research network on Mediterranean studies and migration will be set up, the Euro-Mediterranean Research Network on Migration (EuroMedMig-ReNet). It will include countries and research centres from the south and the north of the Mediterranean and will be coordinated by GRITIM-UPF, with the support of IMISCOE and the Union for the Mediterranean.

The inauguration will take place on 2 July in the Auditorium of the Ciutadella campus, presided over by Oriol Amorós and the rector Jaume Casals

The opening of the Conference will take place on Monday, 2 July at 5pm, in the auditorium of the Ciutadella campus, presided over by Oriol Amorós, secretary of equality, migration, and citizenship for the Government of Catalonia, and Jaume Casals, UPF rector. The opening (5.15pm) will be presented by Ricard Zapata-Barrero, conference chair, and Peter Scholten, IMISCOE coordinator. It will be possible to follow the session, led by Lluís Caelles, adjunct professor of the Department of Communication at UPF and deputy director of the International section of TV3, via streaming via the GRITIM-UPF website.

The Conference has the collaboration of the Union for the Mediterranean (UpM), the European Institute of the Mediterranean (IEMed), the United Nations University (Institute on Globalization, Culture and Mobility) and the Bank La Caixa Foundation, and the support of the Ministry of Labour, Social Affairs and Families of the Government of Catalonia, Barcelona City Council, the Provincial Council of Barcelona and Springer.

”The annual IMISCOE Conference will be a good opportunity to get to know the current status of the research agenda on migration in the Mediterranean and to plan for the future”, says Ricard Zapata-Barrero, full professor with the Department of Political Science, director of GRITIM-UPF and Conference chair.

“I hope that this event will promote a coordinated approach for the entire region to increase the mobility of researchers and students and to establish common platforms for the collection and analysis of data, and that it might serve to make better use of the existing tools”, explains Ricard Zapata-Barrero.

The aim of the meeting is to create synergies between the experts that facilitate the development of public research programmes and migration policies in the Mediterranean. We also wish to highlight the geographical dimension of migration and the human approach of mobility as a reality, a resource and an opportunity to connect societies and cities.

More than 600 participants are expected to participate in an event with nearly 130 sessions including research panels, workshops on immigration, and work sessions for IMISCOE research groups. All together they will analyse specific areas of migration studies, such as transnationalism, superdiversity, solidarity, dispersal and co-development, and relate them with broader ideas about human rights, democracy and liberalism.

Creation of an independent Euro-Mediterranean research network on migration

The Euro-Mediterranean Research Network on Migration (EuroMedMig-ReNet), which will be launched in the course of the meeting at UPF, is an independent interdisciplinary network of research institutions on migration and diversity in the Mediterranean. It is an important step forward in implementing the recommendations of the “Valletta Declaration on Strengthening Euro-Mediterranean Cooperation through Research and Innovation”, held on 4 May 2017 in Valletta, especially on the basic role of research and innovation to better address the problems related to migration.