Researchers from the Institute of Evolutionary Biology (IBE) have generated the complete genomic sequence of the extinct Carolina parakeet from a female specimen held in a private collection in Espinelves (Girona, Spain).

Published in Current Biology, the study reveals the evolutionary history underlying this paradigmatic North American bird declared extinct at the beginning of the 20th century.

The lack of signals of population decline found on its genome points to a human-mediated, abrupt extinction. 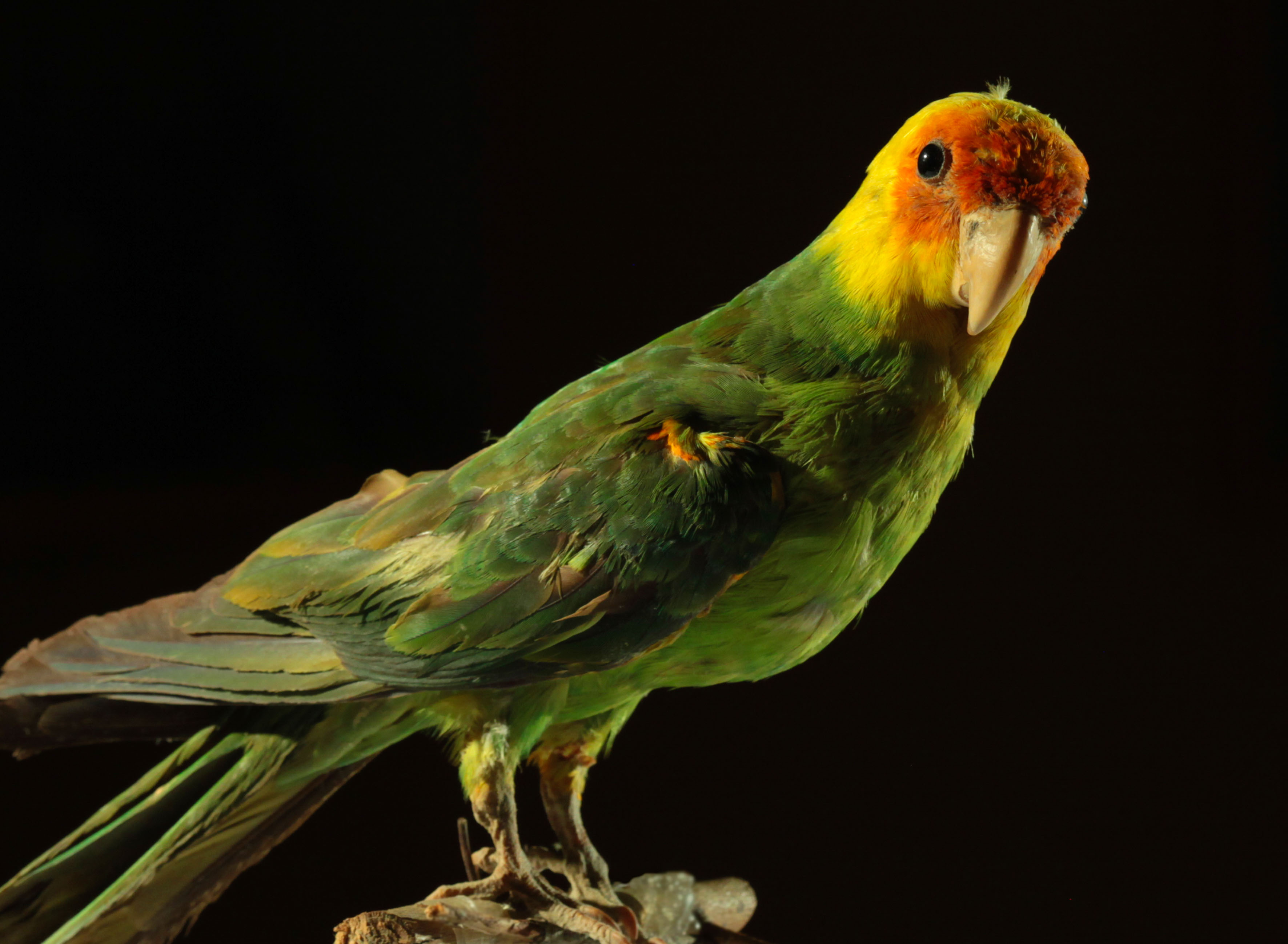 Researchers from the Institute of Evolutionary Biology (IBE, a joint institute of the Pompeu Fabra University (UPF) and the Spanish National Research Council (CSIC)) in Barcelona and the Globe Institute at the University of Copenhagen have unveiled the genome of the Carolina parakeet, declared extinct at the beginning of the 20th century. Researchers explored the genome for signs found in endangered species but did not find them, suggesting that Carolina parakeet extinction was an abrupt process and thus solely attributable to human causes.

The Carolina parakeet (Conuropsis carolinensis) is an iconic North American bird declared extinct at the beginning of the 20th century, after the death of the last specimen at the Cincinnati zoo in 1918. It was the member of the parrot family to live in the highest northern latitude of the planet, and was distributed from southern New England to the Gulf of Mexico, and all the way to eastern Colorado. It had a striking colour pattern: green in the body, yellow on its head and orange on its face.

Despite flying in noisy flocks of hundreds of individuals, it was extensively hunted during the last decades of the nineteenth century, in part for obtaining its feathers to decorate hats. Still, the cause of its extinction remains contentious: although its excessive mortality could well be associated to its recent habitat destruction and active hunting, its survival could also been negatively affected by its range having become increasingly patchy or by the exposure to poultry pathogens.

Now, an international team of researchers, led by IBE Principal Investigator Carles Lalueza-Fox and Globe Institute Professor M. Thomas P. Gilbert, has reconstructed the first complete genome of the extinct Carolina parakeet unveiling the evolutionary history and possible cause of extinction of this paradigmatic bird.

Researchers sampled the tibia bone and the toe pads of a naturalized specimen preserved in a private collection at Espinelves (Girona, Spain) that was collected by Catalan naturalist Marià Masferrer (1856-1923). In order to map the complete genome of the extinct bird, they had to sequence first the genome of a close living relative, the Aratinga solstitialis or sun parakeet from South America.

The genomic analysis of both genomes along with hundreds of other avian genomes determined that the Carolina parakeet and the sun parakeet diverged around 3 million years ago, coinciding with the closing of the Isthmus of Panama.

The Carolina parakeet showed a predilection for eating cockleburs, a plant that contains a powerful toxic that didn't affect the bird but made them notoriously toxic for predators. The genomic analysis unveiled a potential adaptation to this cocklebur diet in two extremely conserved proteins that are known to interact with this toxic.

Researchers also explored the genome for signs of inbreeding and population decline that are sometimes found in endangered species but did not find them, which suggests that its rapid extinction was mainly a human-mediated process. Now, experts wonder if de-extinguishing the Carolina parakeet would be possible. "Despite the Carolina parakeet appears in all de-extinction lists, we found hundreds of genetic changes predicted to be deleterious with the closest living relative, the sun parakeet, which indicates the enormous difficulties of undertaking such enterprises", says Lalueza-Fox.

The methodology developed to reconstruct the extinction history from the bird genome could be used in the future to foresee other possible human-related extinctions, and to further protect the endangered species by applying conservation plans in time. "We can use genomics to test the dynamics of other extinction processes and infer if they are entirely caused by humans, because long-term demographic declines leave specific signals in the genomes of the species", concludes Lalueza-Fox.

Research has been promoted by “la Caixa”, the "Ministerio de Ciencia, Innovación y Universidades" of Spain and the European Research Council, among others.

Interestingly, this project started in a catalan popular science programme, "Quèquicom", directed by UPF professor Jaume Vilalta. Pere Renom, PhD student at the IBE and reporter of the TV3 programme back then, discovered that one Carolina parakeet specimen, collected by a Catalan naturalist at the beginning of the 20th century in USA, was preserved at a private collection in Espinelves (Girona, Spain).  Renom contacted Lalueza-Fox to film the whole process of the genome reconstruction from the stuffed specimen to talk about de-extinction for the TV3 show. "Renom contacted me asking if I would be interested in trying to retrieve DNA from the specimen, and the story ended up two years later with the first complete genome of this north-american bird done at the IBE", Lalueza-Fox explains.

The complete story of the discovery can be seen at the "Quèquicom" episode called “Desextinció: reviure una espècie”, recently awarded with the Spanish Prismas prize as the best video of scientific dissemination of 2019.