A team of researchers led by Xavier Bellés has identified the genes that express during the main transitions of the development of the fruit fly and the German cockroach. Metamorphosis is thought to be an evolutionary advancement, since it has enabled insects conquer most habitats 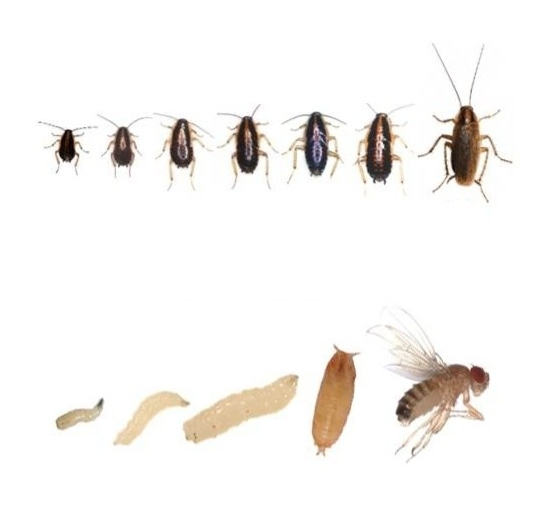 With around 1 million species described, insects are the most diverse animal lineage on Earth. The extraordinary success of insects is due, at least in part, to their long evolutionary history, as they emerged some 450 million years ago. This gave them enough time to evolve a series of key morpho-functional innovations that acted as drivers of expansion and diversification.

From a developmental point of view, a key innovation was complete metamorphosis, the process by which individuals acquire characteristic adult features through the stages of larva and pupa. A team of researchers from IBE led by Xavier Bellés has found general trends in the evolution of the basic processes of modern insects, and most specifically in the evolution from incomplete to complete metamorphosis. Results have been published in the journal iScience.

The first type of metamorphosis was simple and gradual. When an embryo was formed, a nymph with the fundamental features of an adult was developed. This nymph would grow and wings and genitalia would finally be formed. Even if some groups of insects still go through this kind of metamorphosis, 80% of all species go through a complete one. “The complete metamorphosis is considered to be an adaptive advantage for insects. Since the developmental stages of larva, pupa and adult are much differentiated, they do not compete for resources”, says Bellés.

The origins of metamorphosis

The origins of metamorphosis and which genes determine when and how it takes place are two of the great mysteries for entomologists. To find an answer to these questions, the scientists compared the genes expressing in each developmental stage of the fruit fly, Drosophila melanogaster ―one of the organisms most modified compared to the common ancestor, and which undergoes a complete metamorphosis―, with those of the German cockroach, Blattella germanica ―one of the most primitive organisms, which undergoes an incomplete metamorphosis.

Results show that while in the German cockroach the genes involved in metamorphosis are expressed mainly in the final stages of the larvae, they express in the early and mid-embryo of the fruit fly. Moreover, it was observed that the transition of the mother’s genetic program towards the embryonic genetic programme is held in the first stages of embryogenesis in the German cockroach. In the fruit fly, such transition takes place during the whole embryogenesis, and the role of the juvenile hormone does not seem to be relevant in this stage. Such differences quite probably reflect the trends in the evolution of the development from cockroaches to flies.

Recent studies revealed that the biological innovations do not take place due to new genes, but to a different use of the present genes. The researchers compared the genes that express in the main developmental stages of the fruit fly with those of the cockroach. “We have studied the expression of 28,000 genes of the cockroach and 17,000 genes of the fly through their development with the aim of spotting the differences that explain how the most important innovations in the evolution of these species have taken place”, Bellés adds.

In this study, 22 messenger RNA libraries were produced and sequenced for the 11 developmental stages of the cockroach, and 193,014,748 sequences were read. This information is available for the scientific community.