40% of Spanish and Portuguese men have a 4,500 year old common ancestor - NEWS ARCHIVE

40% of Spanish and Portuguese men have a 4,500 year old common ancestor

40% of Spanish and Portuguese men have a 4,500 year old common ancestor

Francesc Calafell, principal investigator at IBE, has led the research, and its results have been published in Scientific Reports 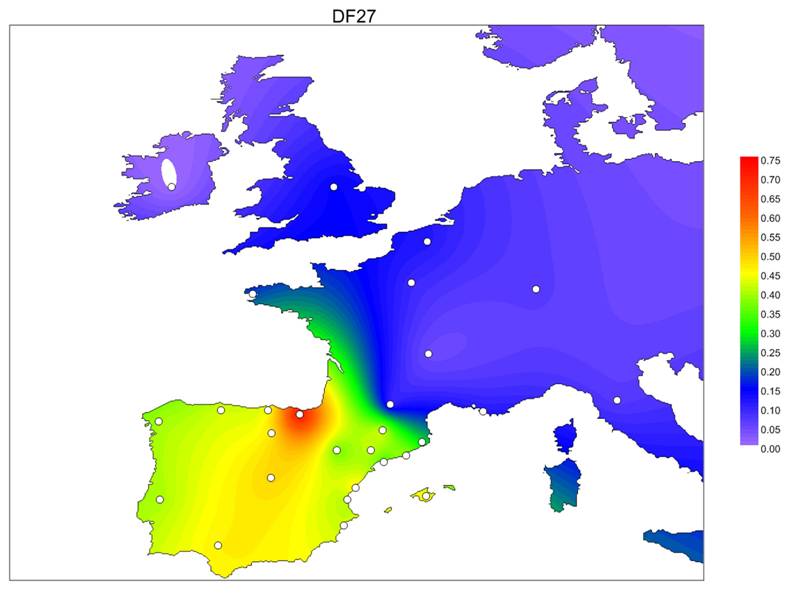 It only contains 1% of the male genome, but it is responsible for men being anatomically men. The Y chromosome, which avoids the formation of the ovaries in the foetus and allows the development of the testicles, is only transmitted from fathers to male progenies. Such a feature makes it easer, from the evolutionary point of view, to trace the existing variants of the Y chromosome. Actually, the origin, dispersion and geographic distribution of most of these have already been identified. A team of researchers from the Pompeu Fabra University (UPF) and the University of the Basque Country led by Francesc Calafell (IBE, CSIC – UPF) have studied the R1b-DF27 variant of the chromosome Y. This variant is known to be very frequent in the Iberian Peninsula.

In the research led by Calafell, the analysis of 3,000 samples of DNA of Spanish, Portuguese and French men has revealed that the R1b-DF27 variant of the chromosome Y is found in 40% of Iberian men and in 70% of Basque men, whereas only in 10% of French men. As Calafell explains, “the evolutionary history of the chromosome Y seems to have happened in waves, that is to say, certain DNA variants have become more frequent following cultural changes or technological innovations”. Regarding the R1b-DF27 variant, the authors of the study state it was originated 4,000 or 4,500 years ago, and most probably in the northeast of Spain.

“Despite being nowadays highly frequent in the Basque Country, the internal measures of diversity and age of this variant of DNA in Basque men are lower than in any other population group, so this is not likely to be the region where it sprang”. Yet, a local Iberian origin seems therefore the most plausible hypothesis given that the R1b-DF27 variant is more diverse and antique in the Iberian Peninsula. Such results fit in with the migration that took place in the Iberian Peninsula during the Bronze Age –the non Indo-European Iberians settled in the Mediterranean coast and in the inland because the central and Western Iberian Peninsula were occupied by the Celtics.

Genetics, a useful tool not only for historians

Studying the R1b-DF27 allows tracing the migrations of Spanish and Portuguese men throughout history. A clear example of this can be found in Latin-America, where this DNA variant is found in 40% men in Colombia, in 36% in Puerto Rico, and only in 10% in Mexico and in 8% in Peru.  The latter can be explained by the fact that the indigenous presence is stronger in these two countries. It can be therefore inferred that Mexicans and Peruvians mingled less with the Iberian colons in the past than Colombians and Puerto Ricans.

Even in Europe, frequencies of the chromosome Y subgroups have been used to detect short-term migrations. For example, the medieval expansion of the Kingdom of Aragon towards the Mediterranean in the XIV and XV centuries or the Castilian occupation of the Flanders in the XVI century have been tracked thanks to the R1b-DF27.

Chromosomal variations such as the R1b-DF27, which is quite frequent in Iberian populations and rare in other regions, can be useful in forensic genetics, too. Its presence in a crime scene can help to identify the geographical origin of the owner of the biological sample from which it has been obtained.

Finally, the chromosome Y is also quite often used in studies related to family names. By analysing the subgroups of the chromosome Y, and taking into account their similarities among men sharing the same surname, a common genealogical origin can be determined.