A study led by Andrej Ondracka describes the highly regular and experimentally tractable coenocytic cell cycle of an ichthyosporean Sphaeroforma arctica. Results published recently in Current Biology show that the periodic nuclear division cycles are driven by a clock-like mechanism that operates independently of the cell size. Omaya Dudin, postdoctoral researcher at the Multicellgenome lab, and Iñaki Ruiz-Trillo, principal investigator at IBE, are the co-authors of this study. 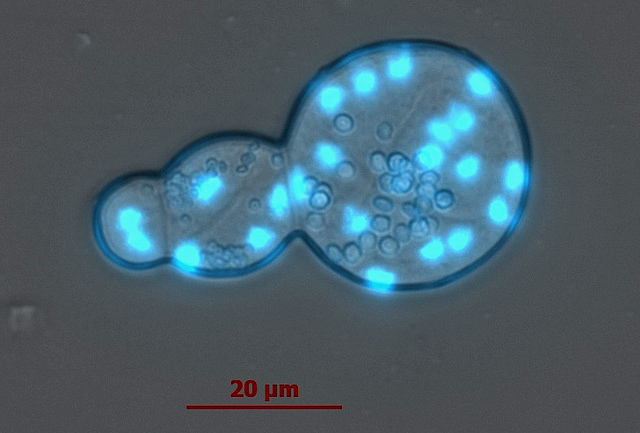 Ichthyosporeans, a group of unicellular eukaryotes characterized by the presence of large, multinucleated cells, are of significant interests to evolutionary biologists due to the fact that they are one of the closest unicellular relatives of animals. It has been hypothesized that the release of the newly born cells from a multinucleate cell might be one of the possible scenarios for the origin of animals. However, better understanding of the multinucleate stage of ichthyosporeans was hindered by the fact that ichthyosporeans often exhibit complex life cycles which were experimentally difficult to tease apart.

The authors turned to Sphaeroforma arctica, an ichthyosporean that appeared simpler and more uniform than other species. Surprisingly, the authors found that these unicellular organisms undergo regular cycles ―small cells grow to multinucleate cells which divide back into many small cells and that these cycles can be easily synchronized. This uniform, tractable behavior will allow the researchers study the process of formation of multinuclear cells on the molecular level and to address hypotheses about the relationship between the multinucleate stage of ichthyosporeans and animal multicellularity.

The authors were also interested in the relationship between the nuclear division cycles ―the process that gives rise to multinucleated cells― and cell size. The authors employed several techniques ―flow cytometry, electronic particle counter, quantitative microscopy with image analysis and simple mathematical simulations― to measure the number of nuclei and cell size during the growth cycle. They found that as cells grow, the cycles of nuclear division occurred with remarkably precise timing, and that the duration of the cycles was independent of the size of the cell or the rate of cell growth. This shows that the process is regulated by a molecular “timer”, very much similar to early embryonic cell cycles in animals.