Ecological specialization on plants or ants fosters diversification in butterflies

Ecological specialization on plants or ants fosters diversification in butterflies

Butterflies typically specialize when selecting which plant species to eat; in addition, caterpillars of many species in the family Lycaenidae have specialized relationships with ants. Caterpillars secrete food in exchange for protection, although in some cases they chemically fool their ant guards into carrying them into the nest where they become predators of the brood.

By analysing patterns of genetic variation in 967 species worldwide, a team that includes the IBE researchers from the Butterfly Diversity and Evolution Lab Sämi Schär (leading author), Gerard Talavera and Roger Vila, show that ecological specialization involving either plants or ants is positively correlated with genetic divergence, haplotype diversity and isolation by distance, all forms of genetic variation leading to higher rates of diversification. We conclude that multi-dimensional ecological specialization can play an important role in generating biodiversity. 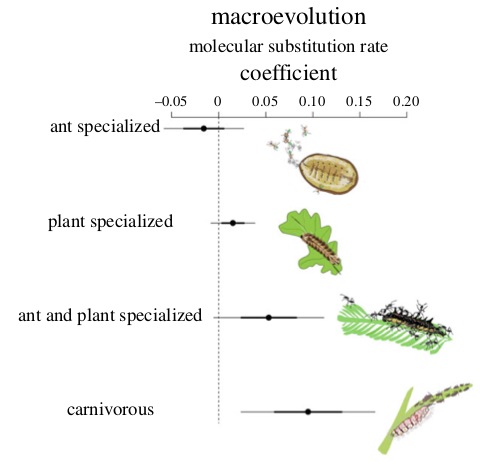