An international team of scientists today published 23 studies in the Nature journals, describing the most comprehensive map of cancer genomes from 38 types of tumours. The results are an important step for the development of personalized medicine. 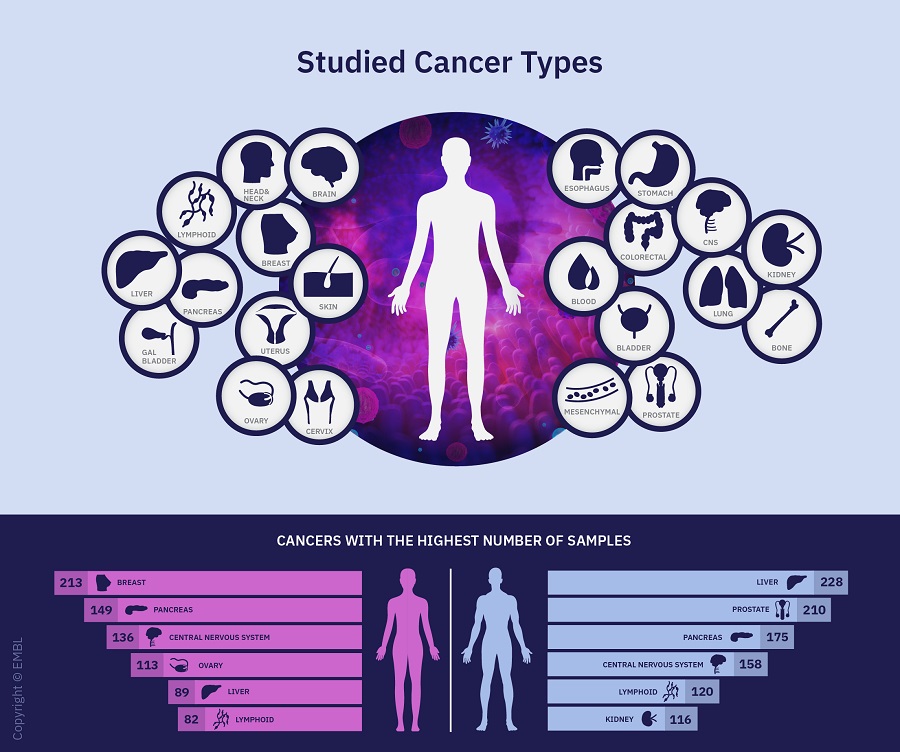 An international team of scientists published yesterday, February 5th, 23 studies in the Nature journals, describing the most comprehensive map of cancer genomes from 38 types of tumours to date. The results are an important step for the development of personalised medicine to treat cancer.

Scientists previously looked for genes linked to the proliferation of cancer in the 1% of the human genome that codes for proteins. These studies are topical because the consortium of scientists have sequenced the remaining 99% of the genome, developing new methods to research the role of the ‘dark genome’ and finding new causes of cancer, new ways to prevent and diagnose it, as well as new treatments.

The results are an important step for the development of personalised medicine to treat cancer.

The main findings across all 23 studies are:

The ‘Pan-Cancer Analysis of Whole Genomes Project’ is an international consortium consisting of 1,300 scientists from 70 research centres across 37 different countries.

The ‘Pan-Cancer Analysis of Whole Genomes Project’ is an international consortium consisting of 1,300 scientists from 70 research centres across 37 different countries, which is why it is considered by some to be the “United Nations” of cancer genome sequencing. It is the world’s biggest cancer genome sequencing project to date. The 5,000 genomes from 2,658 donors (one sample from the cancer genome and another from the healthy base for each donor) generated more than 800 terabytes of information. The database will be a free resource for researchers, accelerating new discoveries such as new therapeutic targets for existing pharmaceuticals.

“These findings are key for the development of personalized medicine, once sequencing the genome of a cancer becomes commonplace in a clinical setting,” says Ivo Gut, director of the CNAG-CRG and chair of the working groups that make up the PCAWG. “In a not so distant future we will be able to precisely diagnose the type of tumour people have, predict its progression with more accuracy and choose the most effective treatment.

“This huge international study was only possible due to the work and collaboration of more than a thousand researchers and clinicians across the world, and I would like to thank everyone involved,” said steering committee member Dr. Jan Korbel from the European Molecular Biology Laboratory (EMBL) in Heidelberg, Germany.

The database will be a free resource for researchers, accelerating new discoveries such as new therapeutic targets for existing pharmaceuticals.

“This work is helping to answer a long-standing medical difficulty, why two patients with what appear to be the same cancer can have very different outcomes to the same drug treatment. We show that the reasons for these different behaviours are written in the DNA. The genome of each patient’s cancer is unique, but there are a finite set of recurring patterns, so with large enough studies we can identify all these patterns to optimize diagnosis and treatment.” said Dr. Peter Campbell, member of the Pan-Cancer Project steering committee and Head of Cancer, Ageing and Somatic Mutation at the Wellcome Sanger Institute in the UK.

The project was founded at the Ontario Institute of Cancer Research in Canada and is now based at the University of Glasgow in Scotland. Amongst the 1300 scientists who have contributed to the project we find researchers from the group led by Tomàs Marquès-Bonet and Arcadi Navarro at the Institute of Evolutionary Biology (CSIC-Universitat Pompeu Fabra).  The Centro Nacional de Análisis Genómico (CNAG-CRG), part of the Centre for Genomic Regulation, contributed to the project involved sequencing 95 primary tumours of chronic lymphatic leukaemia. The Spanish institutions University of Santiago de Compostela, the Institute for Research in Biomedicine and the Barcelona Supercomputing Centre also participated in the project.

The Nature collection landing page with all PanCancer publications.