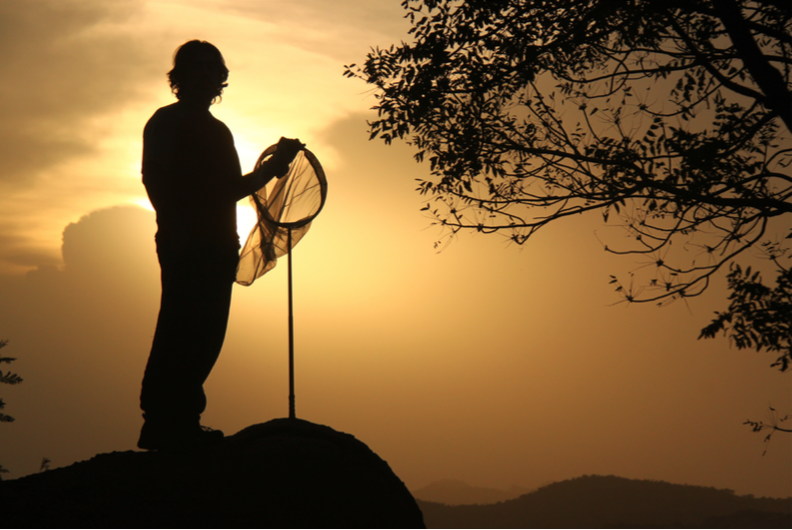 Lepidopterists Gerard Talavera and Roger Vila, a National Geographic Committee for Research and Exploration grantee, explored the southern fringes of the Sahel and the subtropical savannah in Africa in search of a unique spectacle: the massive arrival of European-born Vanessa cardui butterflies after an unparalleled migration.

"It was early October and somewhere in the middle of the Sahelian Chad, thousands of V. cardui butterflies were flying south at high speed. For two hours they were everywhere. They were old specimens—showing broken and worn-out wings with little coloration—but still incredibly fast and active. They were surely coming from a very long trip and probably anxious to finally reach their breeding sites.

"After tracing the butterflies for a few days we ended up in the Guera Mountains in central Chad. This photo captures the beauty of sunsets in the mountains after strenuous days collecting at 40°C. But here the valleys were filled with flowers, and for the first time we saw a different behavior in the butterflies. Instead of hurrying to continue their journey, they stayed here in the valleys, resting and feeding on the flowers. From the Guera and all the way south to Zakouma National Park, they had found their promised land.

"At this stage of the investigation, the patterns observed all [throughout] the Sahel suggest to us that this might be a much longer migration than previously thought. If confirmed with DNA and stable isotope analyses, this could become the longest insect migration ever recorded, with more than 5,000 kilometers [3,100 miles] in a single generation. This is not only a matter of distances but also of obstacles: These butterflies apparently cross the Mediterranean Sea, the mountains of North Africa, the Sahara, and the semiarid Sahel in a continuous flight. How they find and reach the precise breeding sites just when the rainy season ends and host plants abound is still a mystery. As the south of the Sahel rapidly becomes exceedingly dry, the new generation must prepare for the next migratory movement—but where they head for is still unknown."