Last week, Roger Vila and colleagues from IBE (CSIC-UPF), travelled across gorgeous italian landscapes to study and collect butterflies, in order to discover and describe their still largely unknown diversity. The trip was part of the Butterfly Week, a research initiative that involves researchers and citizens.

The Butterfly Week is a research initiative that involves researchers and citizens. It is organized within the project Barcoding Italian Butterflies (BIB) and every year a different destination is choosen. During a week, a group of international researchers, including Roger Vila and collegues from the Institute of Evoulionary Biology (CSIC-UPF), travel across gorgeous italian landscapes to study and collect butterflies, in order to discover and describe their still largely unknown diversity! During the trips, researchers meet the public to explain the importance of butterflies and to involve citizens in the collection and in the conservation actions. The first edition in 2014 was in Tuscan Archipelago National Park. In June 2015 they have been working in Southern Italy (Calabria and Basilicata), where they have catalogued 88 species of butterflies and found 2 holy grails. 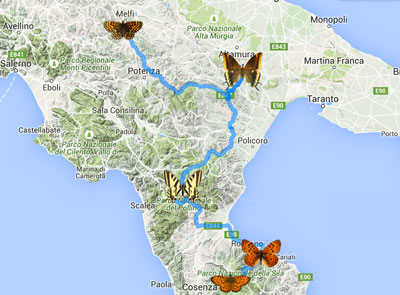 Why Calabria and Basilicata?

Basilicata and Calabria are situated in a key location in the Mediterranean because they combine two of the areas with the greatest genetic diversity known in Europe: Alpine-Apennine area and Sicily. Preliminary investigations of the Barcoding project, in fact, suggest that Southern Apennines represent a strategic place where butterflies from very different origins (Sicily, Alps, Balkans) meet and mingle. This phenomenon is the result of the complex climate evolution over the last millennia, and that of the last tens and hundreds of thousands of years. Bringing light to such a wealth of diversity is the starting point in order to pomote its conservation by planning of specific actions based on rigorous genetic and biogeographic analysis.