The team led by Joshua S. Weitz, Associate Professor in the School of Biology from the Georgia Institute of Technology, has developed BiMat, an open source MATLAB package for the study of the structure of bipartite ecological networks inspired by real problems in microbiology and with broader applications. Cesar O. Flores, a researcher who graduated from the School of Physics of the same Institute, was the lead developer of the software tool, published in the journal Methods in Ecology and Evolution. Sergi Valverde, Visiting Professor in the Complex Systems Lab from the Institute of Evolutionary Biology (IBE-CSIC), and Timothée Poisot, Assistant Professor in the Department of Biological Sciences of the University of Montreal, are involved in the project. 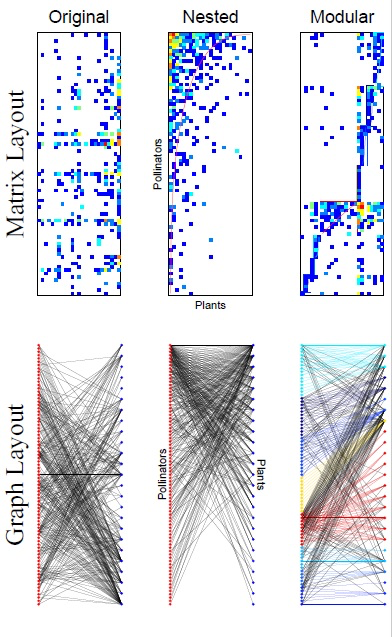 The study of ecological networks helps to understand the biodiversity of our environment and to predict possible extinctions. Bipartite networks are a special type of ecological network where individuals of a certain species interact with individuals of different species. Bipartite networks are ubiquitous in community ecology, such as the relation between phages (viruses that infect bacteria) and their bacterial hosts.

As Valverde comments "complex networks show common patterns, like nestedness and modularity, and their ecological and evolutionary effects can be studied using theoretical and computational methods".

A number of tools have been developed to analyze bipartite networks, but BiMat includes new features available for the first time in a single package. Apart from enabling the identification of the key patterns and the evaluation of their statistical significance, this new tool is also capable of performing multi-scale and meta-analysis of the structure of multiple networks. Furthermore, BiMat includes several visualization tools to explore bipartite networks in either matrix or graph layouts. BiMat was inspired by real problems in microbiology context.  It is applicable generally for the analysis of systems represented by bipartite networks.

BiMat has been developed in an object-oriented environment for both MATLAB and Octave platforms. This design enables easy access to all methods and allows for future open-access extensions by the research community. In addition, the companion website provides an extensive quick start-guide and tutorials.