A study led by Iñaki Ruiz Trillo gives clues to how this ancestor was. de Mendoza A, Suga H, Permanyer J, Irimia M, Ruiz-Trillo I (2015). Complex transcriptional regulation and independent evolution of fungal-like traits in a relative of animals. Elife

All living animals are descended from a single-celled ancestor, and understanding how this ancestor (or these ancestors) became the first multicellular animals remains a major challenge in the field of evolutionary biology. Now, a study published by the Institute of Evolutionary Biology (CSIC-UPF), published in eLife, suggests that the single-celled closest ancestor of animals already had the biological capability of generating different cell types. 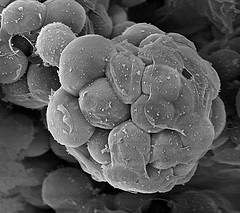 Previously, it was already described that, even though they’re mostly single-celled organisms, the closest living relatives of animals share most of the basic gene toolkit that animals use to support their multicellular lifestyles. This shared toolkit also includes the genes that allow each specialized cell type in an animal (for example, a skin cell or liver cell) to express the subset of genes that it needs to fulfil its specific role. According to Ruiz Trillo, ICREA researcher and University of Barcelona professor who leaded the study, “discovering how the single-celled relatives of animals regulate these and other “multicellularity-related” genes during their life cycles is the next crucial step towards understanding how animals became multicellular.”

For this study, the researchers have used Creolimax fragrantissima, which is one of these single-celled relative of animals. One stage in this organism’s life cycle involves its nucleus (which contains its genetic material) replicating multiple times without the cell itself dividing. After this stage of development, new cells are formed, each receiving with a single nucleus, and released to live freely in the environment. Characterizing how C. fragrantissima regulates which genes are expressed during these two very different stages of development could shed new light on how multicellular animals evolved

to regulate their genes in specific cell types. However, little is known about these processes in C. fragrantissima.

Now, de Mendoza et al. have sequenced C. fragrantissima’s genome and transcriptome and analysed which genes are expressed during the stages of its life cycle. This analysis reveals that this organism regulates its gene expression in several ways that are more commonly associated with gene regulation in multicellular animals. Furthermore, when compared to two other living relatives of animals that have brief multicellular stages in their life cycles, de Mendoza et al. found that the three organisms expressed similar genes during these similar life cycle stages.

Together “these findings suggest that it was likely that the last single-celled ancestor of multicellular animals already had the biological ability to create different cell types” says Ruiz Trillo. And “understanding if the cell types found in unicellular species resemble cell types from sponges and comb jellies at a molecular level is the next step towards determining how the ancestor of animals looked like.”