Lizard unique to UAE at risk due to loss of habitat

Lizard unique to UAE at risk due to loss of habitat

The scientists looked at the morphology [structure and form] of geckos from the Hajar Mountains of the UAE and Oman that are classified as belonging to the Asaccus caudivolvulus species. A complex computer analysis of the data led the scientists to conclude that A caudivolvulus is made up of creatures from three species.

Anyone who has visited the UAE for a period of time will be familiar with geckos, as the little reptiles can often be seen scurrying across garden walls or even in homes. Geckos also hold the interest of scientists, and a new study has revealed that the lizards, which were thought to belong to a single species, should be reclassified as three.

One of this trio is thought to be restricted to a small section of the Hajar Mountains, in the north-east of the country, making it the only known vertebrate species found solely in the Emirates. However, with areas on the UAE’s east coast around the mountains being developed rapidly, the gecko’s long-term survival in the wild could face challenges.

Conservation of geckos is of great significance, says Hana Al Suwaidi, chairwoman of Sharjah’s Environment and Protected Areas Authority, which includes the Breeding Centre for Endangered Arabian Wildlife (BCEAW), which has carried out research into and captive breeding of several UAE reptile species. "It’s highly important, as it’s the only known endemic vertebrate species for the UAE and it is not found anywhere else in the Arabian Peninsula," says Ms Al Suwaidi.

The new study, published in the scientific journal PeerJ, was led by Prof Salvador Carranza, from the Institute of Evolutionary Biology in Barcelona, and Johannes Els from the BCEAW. 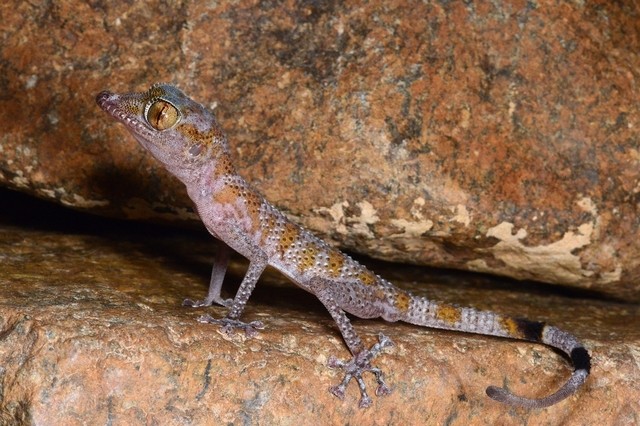 The scientists looked at the morphology [structure and form] of geckos from the Hajar Mountains of the UAE and Oman that are classified as belonging to the Asaccus caudivolvulus species. They measured variables such as the length of the trunk, and the distance from the tip of the snout to the cloaca, the cavity through which waste is released. As well as looking at specimens they had collected themselves, the team analysed preserved geckos held at museums in Muscat and London.

They also used cutting-edge techniques to look at variation in sections of genetic material from the cell nucleus and from the mitochondria, which are energy-generating organelles within cells.

A complex computer analysis of the data led the scientists to conclude that A caudivolvulus is made up of creatures from three species. Factors such as the degree of genetic difference between the species led to the conclusion that they began diverging from one another in the Miocene geological epoch, which ended more than 5 million years ago.

Of the three species, one kept the designation A caudivolvulus (Emirati leaf-toed gecko), while another was named A gardneri (Gardner’s leaf-toed gecko) in recognition of the work of Dr Andrew Gardner, a British scientist who studied the region’s reptiles and amphibians over a long period. Dr Gardner’s work culminated in the publication of a book called The Amphibians and Reptiles of Oman and the UAE. In one of his studies, Dr Gardner identified differences in certain A caudivolvulus individuals, although these creatures were not classified as a distinct species at the time.

In a poignant move, the researchers named the third species, A margaritae (Margarita’s leaf-toed gecko), in honour of Dr Margarita Metallinou, a 29-year-old Greek scientist who was trampled to death by an elephant during fieldwork in Zambia last year.

A gardneri and A margaritae are found only in the Hajar Mountains of the UAE and Oman, with the latter species being smaller and tending to exist at higher altitudes. A caudivolvulus appears to have an even more limited distribution, since it has been identified only at two sites on the east coast of the Emirates, and since the mid-1990s it has been recorded at only one of these locations. The scientific paper notes that this site is being developed, although Prof Carranza thinks the species is, fortunately, probably found elsewhere in the local area.

"I am sure this animal is not only restricted to this locality. We hope we will find it but more exploration is needed," he says. There are a number of vertebrate species endemic to the Hajar Mountains – including the three species in this study, there are 19 reptiles endemic in the area and there is the Arabian tahr, which is similar to a goat – but A caudivolvulus is the only one thought to be found just in the UAE.

Prof Carranza hopes that efforts can be made to ensure that A caudivolvulus is not threatened with extinction. "This animal has been there for 4 million years, so it’s important," he says.

Habitat loss due to development is "the greatest threat to reptile species", says Ms Al Suwaidi. She, too, would like the conservation of A caudivolvulus to be a priority. Preserving "as much as possible" of the area where the creatures live is a key factor in safeguarding their existence.

"With the long history of captive-breeding success for endangered species at the Breeding Centre for Endangered Arabian Wildlife, a combination of attempting to preserve the natural habitat and temporarily creating a safety net for the species in captivity can aid their survival," she says.

The other authors of the study are Marc Simó-Riudalbas, of the Institute of Evolutionary Biology in Barcelona; Sithum Jayasinghe, of the BCEAW; and Dr Thomas Wilms, of Münster Zoo in Germany.