Tomàs Marquès-Bonet included in the Advisory Board of Diplocat

Tomàs Marquès-Bonet included in the Advisory Board of Diplocat

The Advisory Council is formed by 39 internationally-recognized citizens and aims to help promote Catalonia on the world stage. President Carles Puigdemont presided over the Diplocat plenary session which approved the creation of the Advisory Council and he thanked the members for their altruistic collaboration.

The annual meeting of the plenary session of the Public Diplomacy Council of Catalonia (Diplocat) took place on Thursday last week (24 November) in the Sala Tàpies room at the seat of the Catalan Presidency (Palau de la Generalitat). The session was presided over by the President of Catalonia, Carles Puigdemont, and Raül Romeva, Minister of Foreign affairs, Institutional Relations, and Transparency, was also in attendance. Among the decisions taken during the meeting, it was decided to create an Advisory Council to advise and guide Diplocat’s activities. The members of the council will form a part of this body for a period of four years – which can be renewed - and in a selfless altruistic manner. 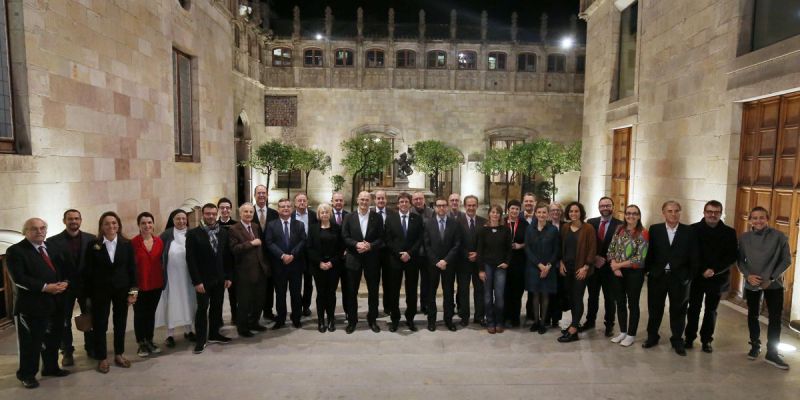 The thirty-nine members of the Advisory Council are people with a recognized international prestige in a wide range of fields including economy, politics, foreign affairs, the arts, and other areas. The full list of names can be checked in this link, but perhaps some of the most well-known ones include: Ambler Moss (USA), ex-ambassador; Jordi Savall, musician; Josep Carreras, musician; Josep Ramoneda, philosopher; Carme Ruscalleda, chef; and Xavi Hernàndez, footballer. Among them, there is Tomàs Marquès-Bonet, head of the Comparative Genomics Lab at the Institute of Evolutionary Biology (CSIC-UPF).

Following the plenary session, President Puigdemont met the members of the advisory council and asked them to “make the most of their capacity for international reach and experience to help us open our doors to the world, make ourselves known, and for our work to be valued.” The President concluded that “recent events in Europe and the USA remind us that the world is becoming more and more complex and uncertain but, on the other hand, it is a world of opportunities and we must not miss the chance to take advantage of them.”

Raül Romeva, Minister of Foreign affairs, Institutional Relations, and Transparency, reminded that “the greatest natural resource of Catalonia is its people” and that “this Advisory Council will allow us to gain international influence and present our country’s assets on the international stage”.

The 2016 Statement on Diplocat’s activities was also presented during the plenary session. Activities carried out within Diplocat’s six main fields of work include parliamentary diplomacy in countries such as Estonia, Switzerland and Finland; twelve academic conferences co-organized with prestigious universities around the world; organizing the talk given by President Puigdemont in May at the prestigious Chatham House, in London; the event on Historic Memory presented by Minister Romeva in July, coinciding with the 80th anniversary of the start of the Spanish Civil War; the conference given by the American economist and sociologist Jeremy Rifkin, organized together with the Diputació de Barcelona (a local government body); and the International Forum on refugees organized alongside the Barcelona City Hall and other bodies.