A research team with the participation of researchers from the Institute of Evolutionary Biology (IBE) has discovered that extremely similar but unrelated people share genetic characteristics in the genes responsible for the formation of facial features. This explains, from a biological point of view, the appearance of "doubles" in remote places, and could help in the identification of a person from genetic material, which would be of great interest in forensic and legal medicine. 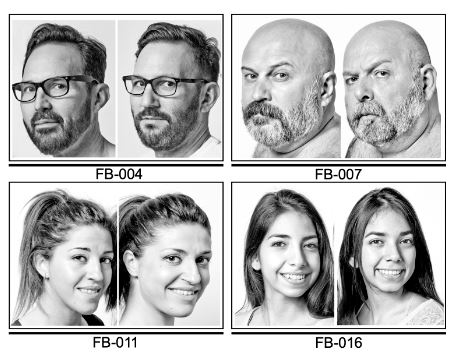 There is a saying that we all have a double. For decades, the existence of individuals who resemble each other without any family ties has been described as a proven fact, but anecdotal and without any scientific justification. However, the appearance of the Internet and social networks has led to the sharing of millions of personal photographs around the world and has brought to light that the existence of "copies" among human faces is more frequent than we previously believed.

Today, an article published in the journal Cell Reports led by the group of Dr. Manel Esteller, director of the Josep Carreras Leukemia Research Institute, and with the participation of researchers from the Institute of Evolutionary Biology (IBE), a joint center of the Spanish National Research Council (CSIC) and the Pompeu Fabra University (UPF), demonstrates for the first time the reason why we find identical individuals in different parts of the world.

As explained in the article, which has the participation of IBE principal researchers Arcadi Navarro and Carlos Lalueza-Fox - also director of the Barcelona Museum of Natural Sciences (MCNB) - and Pablo Carrión and Manuel Ferrando-Bernal of Lalueza-Fox's Lab, people with reasonable resemblances were subjected to facial recognition programs that allowed to discover pairs of individuals that were almost indistinguishable from each other. Then, researchers analyzed their DNA sequence (genome), their epigenetic profile (genome regulation mechanisms) and their composition of microbes (microbiome).

In particular, the IBE team contributed to the analysis of ancestry and possible distant family links of the doubles. "We found that the couples had a common population component, given that they generally came from the same country or from neighboring countries", comments Carles Lalueza-Fox, principal investigator of the Paleogenomics Lab at IBE. "We also ruled out that they were actually distant family without being aware".

The results showed that human doubles share similar variations of their DNA, particularly in relation to those genes involved in the formation of the mouth, nose, eyes, chin and forehead. Given that the human population is now 7.9 billion, and we are much more interconnected, these repetitions are increasingly likely to occur.

"The appearance of "doubles" of a person has been a matter of attention several times in cinema and literature: we can think of 'The Double' by Dostoyevski or 'William Wilson' by Edgar Allan Poe" explains Lalueza-Fox . "However, it had never been explored from genomics, and it makes all the sense in the world to do so because the appeareance is a reflection of the genome and its expression."

But the similarities go beyond the face, based on to the results of the study. According to Lalueza-Fox, “we can say that, unlike in the literature, where a double is usually morally 'defective', in the analysis we have found that doubles also share, in addition to phenotypic genes, genes involved in traits of behaviour."

Esteller is confident that this study can open new research lines in the future in different areas, and he highlights, on the one hand, that “it provides the basis for diagnosing genetic diseases from the analysis of the image and shape of the face” and on the other hand, “it allows, from an unknown DNA sample, to reconstruct the face of the person to whom that genetic material belongs, one of the great desires of forensic medicine”, concludes the researcher.