Discovered the mechanism that prevents adult insects from molting

Discovered the mechanism that prevents adult insects from molting

A research team from the IBE has discovered the mechanism that makes insects stop molting once they finish metamorphosis. The study identifies the mechanism that triggers the destruction of the prothoracic gland, responsible for molting, when the insects reach adulthood. Published in the journal Development, the research could be used to study to what extent a previously determined cellular program, such as metamorphosis, is reversible. 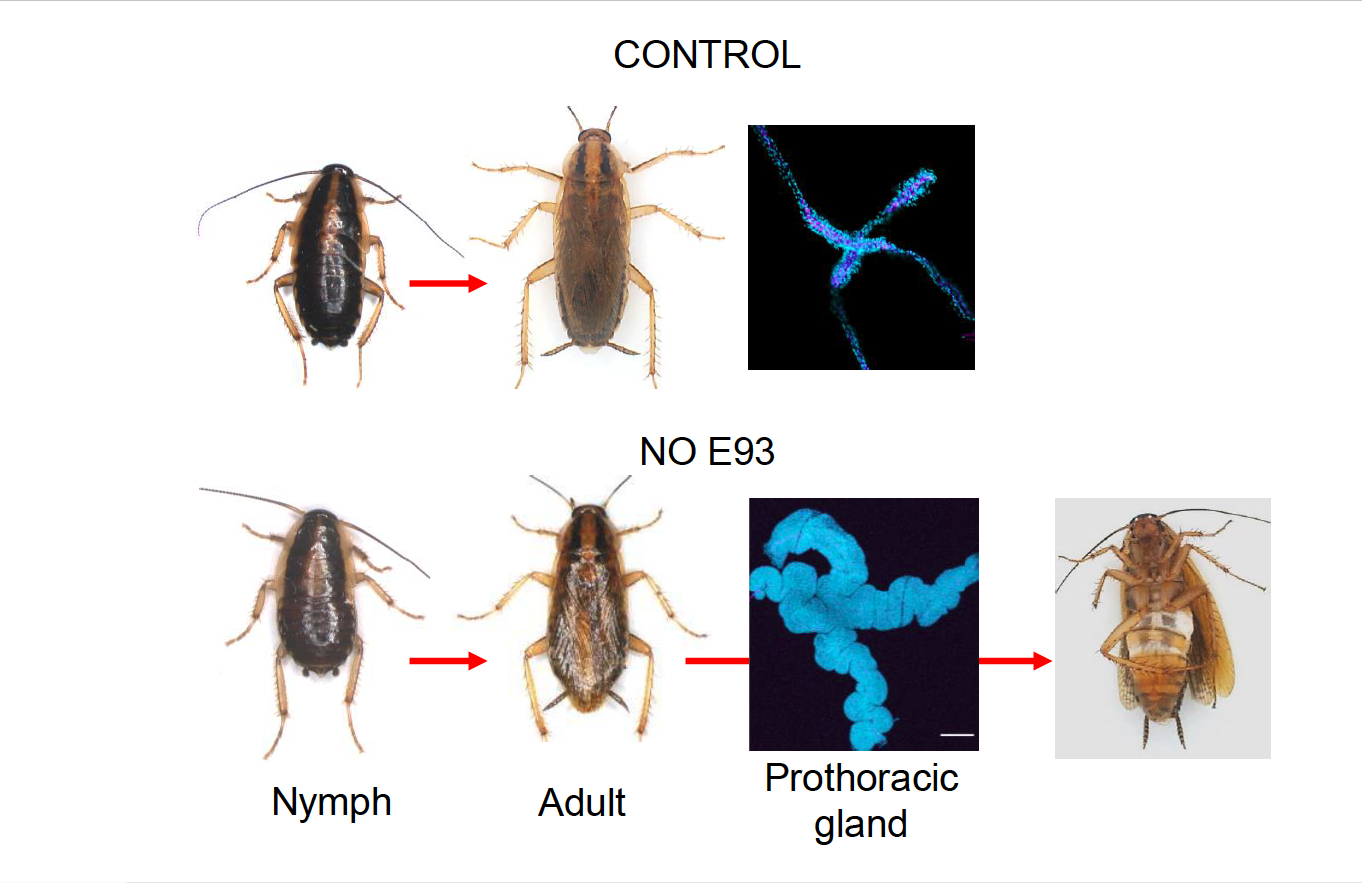 Another important feature of insects is metamorphosis, by which a juvenile form, a nymph or a pupa, transforms into an adult, and completes the formation of functional wings and a reproductive system. The wings usually have a shape of a very fragile membranous sheet, so it would be mechanically very difficult to experience molting. To avoid this problem, insects simply stop molting once they reach the adult, winged state.

How have they done it? In a very radical way: once the insect reaches adulthood, the gland that produces the hormone that triggers molting (called the prothoracic gland) self-destructs. As for the mechanisms that determine self-destruction, until now it was believed that the decisive element was a transcription factor called FTZ-F1.

Now, a study conducted at the Institute of Evolutionary Biology (IBE), a joint center of CSIC and Universitat Pompeu Fabra, by Xavier Bellés and Orathai Kamsoi on the German cockroach, Blattella germanica has revealed that FTZ-F1determines the production of another factor, called E93, which is what really triggers the destruction of the gland by a process of programmed cell death.

FTZ-F1 : a single precursor behind the adult stage of insects

In essence, the experiment to prove this was to reduce the production of FTZ-F1 at the end of the last nymphal stage, and to check that the insect did not produce E93 in the prothoracic gland, and that the gland did not self-destruct when the insect molted to adulthood. At the same time, by directly reducing E93 production under the same conditions, the same effects were observed: adult molt but keeping the prothoracic gland intact.

It is worth noting that these adults that retain the prothoracic gland are able to molt again, although they cannot completely detach from the old exoskeleton. The fact that it is possible to provoke the formation of an adult (with wings, therefore) able to molt again can serve as a model of wing molting to study the mayflies, the only insects that are able to molt again when they have acquired functional wings. It can also be used to study the mechanisms by which a predetermined cell program, such as metamorphosis, can be artificially reverted.

The results obtained also have an evolutionary significance, as they fit into a recently proposed theory on the origin of insect metamorphosis by one of the authors of the present work, Xavier Bellés, responsible of this study and Principal Investigator at evolución de la metamorfosis de los insectos lab (Belles, X. 2020. Insect metamorphosis. Academic Press, London). "To invent metamorphosis, two things are needed: one to form a functional wing as the insect becomes an adult, the other to destroy the prothoracic gland at the same time, so that it will not be able to molt further. Until now it was known that E93 plays a very important role in the formation of the adult wing. The discovery that E93 also plays an important role in the destruction of the prothoracic gland provides robust support for the aforementioned theory on the origin of metamorphosis", concludes Bellés.