The first case of a Portuguese beetle living exclusively in groundwater

The first case of a Portuguese beetle living exclusively in groundwater

New to science, the species was named after Pluto, the ruler of the underworld in Roman mythology 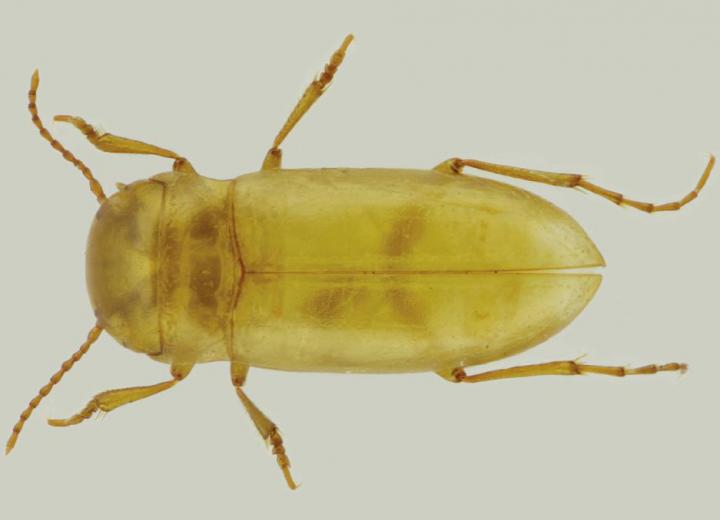 A diving beetle demonstrating various adaptations to the life underground, including depigmentation and evolutionary loss of eyes, was discovered at the bottom of a clay pound in the cave Soprador do Carvalho, Portugal. The species turned out to be the very first in the whole order of beetles (Coleoptera) to be known exclusively from the underground waters of the country.

Despite not being able to find any other specimens during their study - save for the single female, the team of Dr Ignacio Ribera, Institute of Evolutionary Biology (Spain) and Prof Ana Sofia P. S. Reboleira, University of Copenhagen (Denmark) identified the beetle as new to science, thanks to its unambiguous morphology in combination with molecular data.

Aptly named Iberoporus pluto in reference to the ruler of the underworld in Greek mythology Pluto, the species was recently described in the open-access journal ZooKeys.

With a uniformly pale orange body measuring 2.8 mm in length and 1.1 mm in its widest part, the beetle is larger than the rest species known in its genus, and its appendages are longer and more slender. While blindness and depigmentation are clear adaptation to life away from sunlight, the elongated limbs and antennae reflect poor swimming abilities needed in a subterranean habitat. Going for 4 km in horizontal direction, Soprador do Carvalho is the largest in the Dueça cave system, located in the north-eastern part of the Sicó karst area in central Portugal. In recent years, the cave is being explored for tourism.

"The knowledge of the subterranean fauna from Portugal has significantly increased over the last decade, with the description of a high number of obligate subterranean species (tripling their number) and the establishment of new biogeographic patterns," explain the authors of the study. "A high number of these species are stygobiont (i.e. confined to groundwater), mostly from wells in the north of the country, where evapotranspiration is higher."

Ribera I, Reboleira ASPS (2019) The first stygobiont species of Coleoptera from Portugal, with a molecular phylogeny of the Siettitia group of genera (Dytiscidae, Hydroporinae, Hydroporini, Siettitiina). ZooKeys 813: 21-38. https://doi.org/10.3897/zookeys.813.29765