Interview with Tomàs Marquès-Bonet: "No matter how clever we are, humans will disappear" - NEWS ARCHIVE

Tomàs Marquès-Bonet is an ICREA researcher at the Department of Health and Life Sciences at UPF and head of the Research Group on Comparative Genomics of the Institute of Evolutionary Biology, a joint UPF and CSIC centre, and of the CNAG-CRG. His research focuses on the study of the genome. 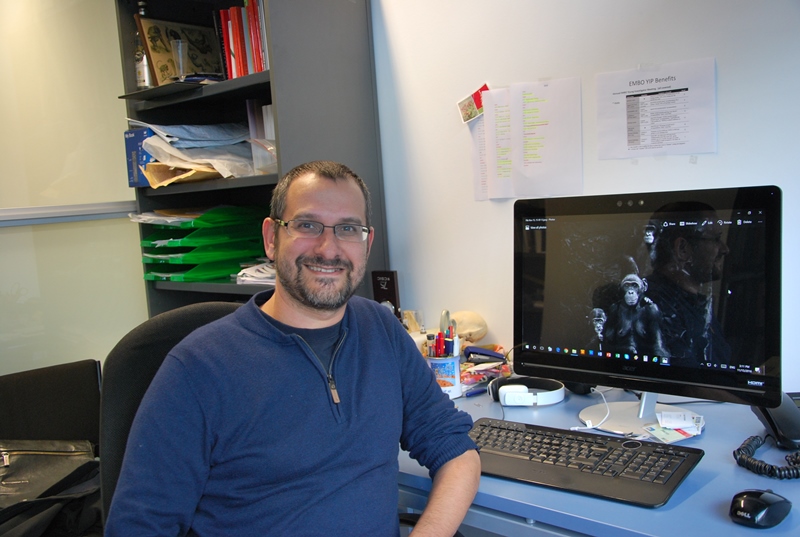 Tomàs Marquès-Bonet is an ICREA researcher at the Department of Health and Life Sciences (DCEXS) at UPF and head of the Research Group on Comparative Genomics of the Institute of Evolutionary Biology (IBE), a joint UPF and CSIC centre, and of the CNAG-CRG. His research focuses on the study of the genome. His group uses genomics, transcriptomics and epigenetics to understand the basis of the features that are exclusively human, explore the impact of demographic changes on diversity and the impact that variants in the number of copies in the DNA have on the phenotype.

His latest article is published in the scientific journal Science, in which he reveals ancient crosses between chimpanzees and bonobos and creates new opportunities for the conservation of the species.

- The results of your latest study, published in Science, will help with the conservation of chimpanzees and bonobos. How can this research help to improve the current situation of these species?

Chimpanzees and bonobos are species in danger of extinction. There are two threats to their survival: deforestation, where my research can do little to help, and illegal trafficking. Poachers capture the animals and sell them at markets for consumption or they even keep them as pets. When these animals are intercepted at customs, they cannot be returned to their country of origin because no one knows where they came from. Our article proves for the first time that there are genetic differences between the chimps of different countries, that is to say, the genome of a chimpanzee in Gabon is different from that of one in Uganda. From now on, when a chimpanzee is intercepted, by means of genetic analysis we will be able to know what country it belongs to and we will be able to return it there. In this way we can also perform statistics and calculate which country the bulk of the traffic is coming from so that the country can adopt the necessary measures to prevent it.

- It has always been said that bonobos are a passive species while chimpanzees are more aggressive. Can the same comparison be applied to humans and Neanderthals?

The social structure and the behaviour of chimpanzees and bonobos is well studied and defined. One group is clearly dominated by males and the other by females. But genetics still do not explain these traits. What we can compare is the story of genetic crosses. 2010 saw the first sequencing of the Neanderthal genome and it was found that there were crosses between Neanderthals and modern humans. This opened up a new way of understanding the evolution of humans and other species. Humans and Neanderthals had separated thousands of years ago then they intercrossed. Now, when comparing chimps and bonobos, we see that it is a similar story. On the one hand, this implies a change of dogma, because everything that had been studied so far said that these species had never crossed and, on the other hand, it proves that the crossing of the species once they have diversified is something that recurs not only in human evolution but in the evolution of the species in general.

- What happened to the Neanderthals?

There are three hypotheses: according to the classical one, Homo sapiens sapiens was more advanced technologically and we overcame them. The second hypothesis is that, when the great mass of modern humans came from Africa, the Neanderthals retreated ending up in small isolated nuclei which favoured their consanguinity. The third is assimilation, that is to say, that the two species mixed and became one. Genetics tells us that the last two are the most likely, the creation of cores with high consanguinity and in other cases we assimilated them. But probably all three took place; we eliminated some groups, isolated others, and some we assimilated.

- Recently an article has been published that studies aggression in mammals and, comparing us with other primates, we are among the least violent.

We must demystify the idea that humans are bad and that nature is good. We are surrounded by examples in which we see that nature is cruel and, within this cruelty there’s us. I would not be able to tell you if we are among the most or the least cruel, but we can say that we are very civilized. Chimpanzees, which are the closest species to us, are clearly very aggressive. Sure we, in wars, are too; but this just proves that we are on the same level, neither worse nor better. We are part of a network of primates and we do what other primates do. We don’t do that many things that are so very different in this sense.

- Two years ago, your team published in the journal Nature what is considered to be the most complete catalogue of genetic differences between humans and other primates. Do we know to what physical characteristics these genetic differences correspond?

This is the great challenge for evolutionary biologists and at the moment there does not seem to be a solution. Other species, such as a fly or a mouse, can be genetically modified and the consequences can be observed, to find out to which physical characteristic that gene corresponds. Of course, we will not experiment genetically with humans and we can’t on our primate relatives either. So for now it is impossible to know to which physical features the genetic differences between one species and another correspond. We have tried to take genes only found in humans and integrate them in mice. But we cannot expect that after one transmission of genes, mice will stand on their hind legs and speak. Biology is far more complex. We are also testing with cell lines, but with great limitations, as a cell culture cannot be compared to a brain.

- Your research can be summed up in one question: what makes us human? How far have you got in your answer?

There are many answers. Morphologically, we can speak of full bipedalism, the expansion of the neocortex of the frontal part, of a highly developed culture, etc. But, the more we compare humans and chimpanzees, the more clearly we can see that we share virtually all behavioural traits but to different degrees. We are finding it difficult to find what makes us uniquely human.

We can say what differentiates a human genome from one of a chimpanzee; but, does that make us human? Not really. If we compare the genomes of any two people, we will also find differences in spite of both being humans. Today we have a catalogue of differences, but we still don’t know what is at the base of the processes related to humanization. We don’t know what makes us bipeds, we don’t know why we have so little hair... We think we know a lot about the genome, but the truth is that we have still not understood the behaviour and the regulation of much of it.

Natural selection will always be there, with greater or less force. Our society has created a very different atmosphere. We no longer live in the jungle or fight for survival, but we continue to be subjected to this selection. Even in the distant future, in which we will surely edit genomes before birth, there will continue to be natural selection. Selection is a blind process in which mutations are generated and those individuals that are most adapted are the ones that most disseminate their mutations. Genome editing allows us to accelerate this selection giving mutations that we know are pre-adapted; but the reality is that selection acts over thousands or millions of years. No matter how clever we are, humans will disappear. We are just a minor accident in the great evolutionary scale of the Earth.

- Another of your group’s lines of research is with dogs. How does the domestication of the dog and the creation of races affect its genomes?

The dog is a very good model for studying mutations in the genome and their functionality because in 300 years we have created all of the breeds of dog with a huge variety of sizes and shapes that we see in dogs today. We are now analysing 400 complete dog genomes and one of the things we have deduced is that different races have greatly distinct mutations. We have also noticed that when we choose the features we most like about a breed, we involve initial mutations shared by all members of the same breed that are not necessarily beneficial. I think, however, that within a few years we will balance out these mutations through genome edition. When we find out which mutation makes the french bulldog breathe badly, we’ll fix it. in this way, we will keep everything we like about the dog physically and get rid of what is not good for it.