A new article published in Nature Communications examines cancer from the evolutionary point of view. The research team has shown that the distribution of mutations in human tumours is more like that in chimpanzees and gorillas than in humans. 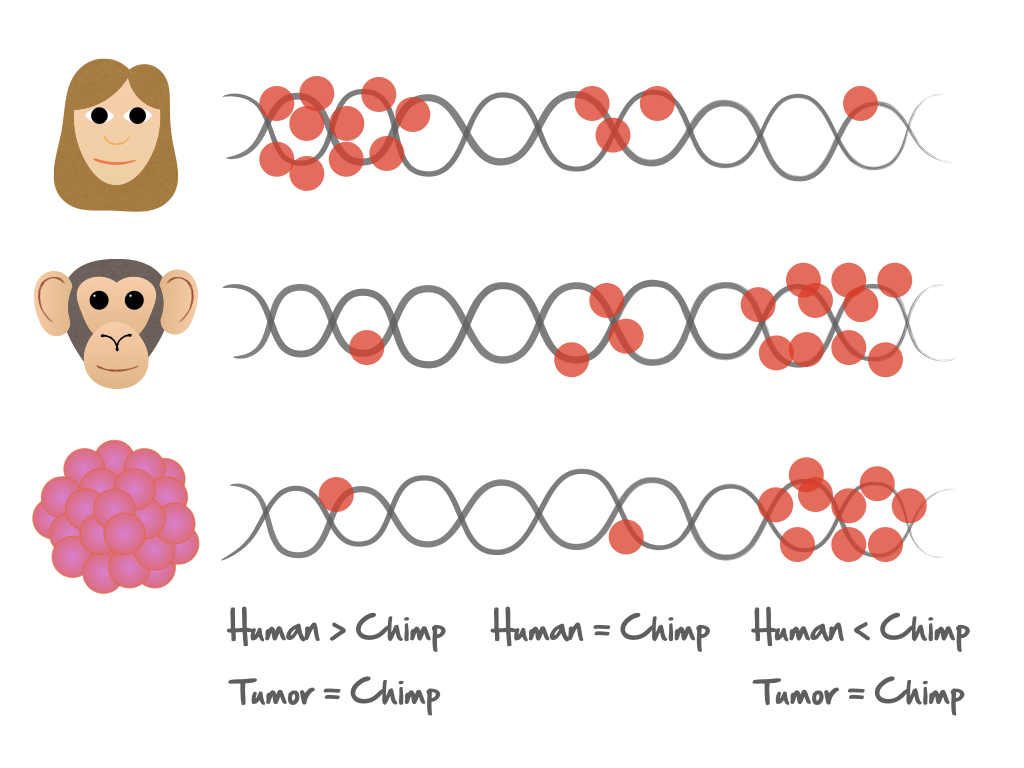 A new study by researchers from the Institute of Evolutionary Biology (IBE), a joint centre of UPF and the Spanish National Research Council (CSIC), shows that, surprisingly, the distribution of mutations in human tumours is more similar to that of chimpanzees and gorillas than that of humans.

The article, which analyses cancer from the evolutionary point of view, is published today, 19 May, in Nature Communications. It was led by Arcadi Navarro and David Juan and involved the researchers Txema Heredia-Genestar and Tomàs Marquès-Bonet.

Mutations are changes that occur in DNA. They are not distributed throughout the genome evenly, but some regions accumulate more and others less. Although mutations are common in healthy human cells, cancer cells display a greater number of genetic changes. During the development of cancer, tumours rapidly accumulate a large number of mutations. In previous studies, however, it had been observed that surprisingly tumours accumulate mutations in very different regions of the genome from those normally observed in humans.

The research suggests that the conservation and study of the great apes could be highly relevant to understanding human health.

Now, thanks to the data from the project PanCancer, a research team from the IBE has compared the regions of the genome that accumulate more and less mutations in tumour processes, in the recent history of the human population, and in the history of other primates. The results of this new study reveal that the distribution of mutations in tumours is more like that in chimpanzees and gorillas than in humans.

“To date, it was thought that the genetic differences we find when we compare tumours and healthy humans could be caused by the ‘abnormal’ way tumours have of accumulating mutations. In fact, we know that tumours rapidly accumulate a large number of mutations and that many of their genome repair mechanisms do not work well”, comments Txema Heredia-Genestar, first author of the study who recently completed his PhD at the IBE. “But now, we have discovered that many of these genetic differences have to do with our evolutionary history”.

The distribution of mutations in humans, skewed by population events

When an individual’s genome is sequenced, it is observed to have a small number of new mutations — some 60— compared to their parents, those of their parents with respect to their grandparents, and so on with each previous generation. Therefore, in a person, approximately three million mutations can be seen that represent the evolutionary history of the mutations accumulated over hundreds of thousands of years. Of these, a few are recent and most are very old.

However, when tumour mutations are analysed, what is seen are just the mutations that have taken place during the tumour process, since the analysis does not take into account the information on populational history.

“We have seen that the distribution of mutations in the human genome is skewed because of human evolutionary history”, Heredia-Genestar details. The manner in which a tumour accumulates mutations is the same as a human cell has of accumulating mutations. “But, we do not see this in the human genome because we have had such a complicated history that has made our distributions of mutations change, and this has deleted the signals we should have”, he adds.

The distribution of mutations in the human genome is skewed because of human evolutionary history.

Throughout history, the human population has suffered drastic declines and has even repeatedly been on the verge of extinction. This phenomenon is known as a bottleneck, and it causes humans as a species to have very little diversity and fewer mutations: they are very similar to each other. In fact, chimpanzees are four times more genetically diverse than humans.

To understand how mutations accumulate in human cells it is more useful to look at how they accumulate in other primates rather than looking at it in human populations.

“Cancers, like chimpanzees and gorillas, only show the complete mutation landscape of a normal human cell. It is we humans, with our turbulent distant past, who display a distorted distribution of mutations”, adds Arcadi Navarro, ICREA research professor at the IBE, full professor at UPF and co-leader of the study.

The research suggests that the conservation and study of the great apes could be highly relevant to understanding human health. David Juan, postdoctoral researcher at the Comparative Genomics lab and co-leader of the study, concludes that “in the particular case of the development of tumours, other primates have proved to be a better model for understanding how tumours develop at genetic level than humans themselves. In the future, our closest relatives could shed light on many other human diseases”.