Researchers from the Institute of Evolutionary Biology (IBE) have combined the metabarcoding technique of massive sequencing with complex networks analysis to decipher the relationships and evolutionary history of unicellular relatives of animals.

By analysing the similarities among short sequences of DNA in over 1,000 samples of ocean water, the novel method has allowed identifying an unknown group of organisms closely related to the choanoflagellates, considered the nearest unicellular living relatives of animals.

The novel technique could reveal crucial information on the hidden biodiversity of the oceans and shed light on the origin and evolution of multicellularity from the unicellular common ancestor. 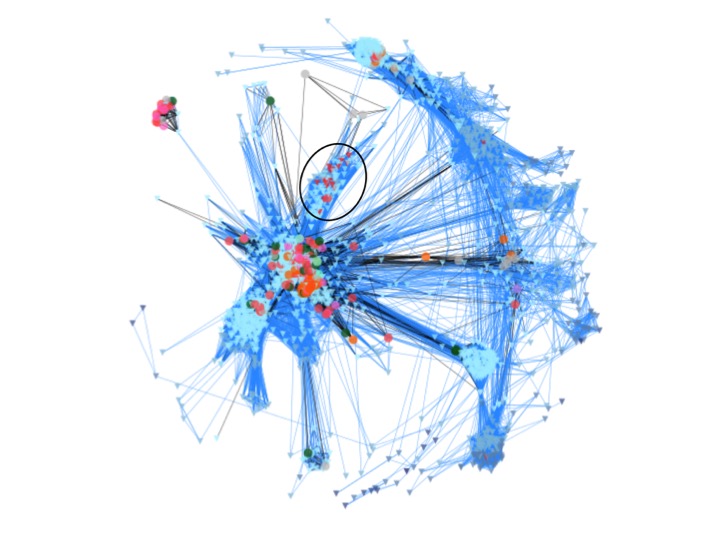 Oceans are full of unknown diversity. Out of the vast number of life forms on the planet, it is estimated that fewer than 25% have been characterized, perhaps even fewer than 0.01%. Among this list, microscopic organisms are especially poorly represented: while up to 80% of all eukaryotes are protists (i.e., single-celled eukaryotes), these account for only 3% of described eukaryotic species. However, some of these unknown species include lineages that may be key to understand the origin and evolution of multicellular organisms.

Now researchers of the Institute of Evolutionary Biology (IBE), a joint centre of the Spanish National Research Council (CSIC) and the Universitat Pompeu Fabra, have combined the power of complex networks analysis with metabarcoding massive DNA sequencing to identify the uncharacterized microbial biodiversity of the world’s oceans and thus shed light on the origin and evolutionary processes that gave rise to multicellular animals from our unicellular ancestors.

To this end, Iñaki Ruiz-Trillo, Principal Investigator of the Multicellgenome Lab at IBE, and recently doctorate Alicia S. Arroyo from the same group, together with colleagues of the Institut de Systématique, Évolution, Biodiversité in France, have looked to the closest unicellular living relatives of animals, a group of protists known as the Holozoa. According to Ruiz-Trillo, "previous research had suggested that many members of this clade remained uncharacterised, providing an incomplete picture of the origin of multicellularity, and we wanted to fill this gap".

In their study, the authors have analysed data from over 1,000 samples of ocean water taken from 210 locations around the world. The samples were collected aboard the schooner Tara, which crisscrossed the globe as part of a 4-year expedition to sample and characterize planktonic diversity. Because only a small portion of the genome of each species was sequenced, Ruiz-Trillo et al. combined metabarcoding (a method of species identification using a short section of DNA) and gene similarity networks for the first time to analyse the data and reveal hidden evolutionary relationships.

The authors have analysed data from over 1,000 samples of ocean water taken from 210 locations around the world, collected aboard the schooner Tara.

Using this approach, the researchers revealed over 2,000 unique sequences that are likely to represent unknown unicellular Holozoans in the world’s oceans.  "This powerful technique has allowed us to analyse millions of DNA sequences from a small sample of water and also know what type of species inhabit that ecosystem with great precision", adds Ruiz-Trillo.

"Combining metabarcoding and gene similarity networks has allowed us to analyse millions of DNA sequences from a small sample of water and also know what type of species inhabit that ecosystem with great precision", adds Ruiz-Trillo, IBE researcher and leader of this study.

In particular, the researchers identified a group of organisms that are closely related to the choanoflagellates, considered to be the nearest living relatives of animals. Because of this relationship, future analyses of this newly discovered group, referred to by the authors as MASHOL (Marine Small HOLozoa), might provide new insight into the evolution of multicellularity and the origin of animals.

The researchers identified a group of organisms that are closely related to the choanoflagellates, considered to be the nearest living relatives of animals.

In addition to the discovery of this novel clade, the study provides the first analysis of the geographic distribution of various Holozoans, identifying subgroups that are more abundant in the Arctic, South Pacific, North Pacific, or Atlantic Oceans, as well as those that prefer deeper or shallower water. “Our analyses provide a hint as to where to begin to look for new species or clades. The tree of life is immense, and discovering new microbial species is hard, time-consuming work. Our study suggests habitats where these organisms may be located, as well as what characteristics they might have based on their phylogenetic relationships”, says Alicia S. Arroyo, first author of the study.

The newly developed methodology could help at deciphering new species and evolutionary relationships among different unicellular relatives of animals and also pave the way towards a better understanding of the origin and evolution of multicellularity.